One of the main causes of air pollution is fossil fuels use that releases many harmful gases and is responsible for greenhouse gas emissions. This is harmful for people-especially children and elderly- and environment. To avoid air pollution, the emphasize is on reducing dependence on fossil fuels for energy and transportation, and changing habits.

Switching from fossil fuels to clean energy can reduce emissions and provide clean fuel for heating and cooking. Moreover, clean energy sources are also renewable which do not deplete natural resources or cause environmental harm in the production phase reports Penn State University. These include bio-energy, wind, hydroelectricity, solar, ocean, thermal, and geothermal energy.

Wind energy can be obtained by turbines that convert kinetic energy in moving air into mechanical energy, which is then converted into electricity. No emissions or solid wastes are produced during the production of wind energy, but can often result in noise pollution.

Solar power is produced from the energy from the sun and fuel isn't burned, so there are no emissions or any harmful gases produced in its use and production. It is a technology that is anticipated to reach historically carbon-neutrality, . i.e. the emissions from the production of panels and other equipment. This energy is ideal for residents, institutions and business, and there are many possible applications available, such as photovoltaic singles or panels on rooftops for electricity and heat generation, solar vents to cool houses and solar ovens for cooking.

Geothermal energy is a natural form of thermal energy, It's produced by the molten inner core of the Earth. It can be used to heat and cool buildings. Some electricity is required to run geothermal system pumps. However, the organization, Geo-Energy, considers that energy requirement to be nominal in comparison to fossil fuel caused air pollution, especially since geothermal improves air quality. 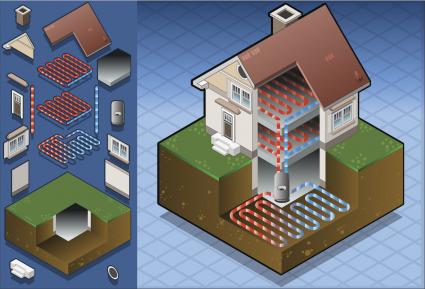 Thermal energy is energy in motion. It can be exploited through various systems including, combined heat and power units (CHPs), fuel cell technology and ocean thermal energy.

Hydroelectricity is produced by hydropower, such as a power dam. The gravitational force of falling or flowing water hits a penstock in the dam that turns turbine propellers to produce electricity. This is currently the most widely used form of renewable energy. However, dams aren't absent of emissions, according to The Seattle Times.

Bioenergy is produced from biomass created from living things, such as trees and plants and bioenergy crops like corn, switchgrass and poplar. Bioenergy's usefulness depends on what the sources of feedstock or biomass are, and how long it takes to grow them. It is not considered completely carbon neutral, when derived from wood and its wastes, as trees require a long time to grow, and burning them contributes to carbon emissions, according to Congressional Research Service (pg. 2). The U.S. Energy Information Administration FAQ (EIA) explains that in 2018 renewables accounted for 17% of the country's energy production.

Since people cannot do without vehicles and mobility, there are newer clean and alternative technologies available on the market that are replacing diesel and petroleum fueled cars. These vehicles have the advantage of producing either zero or reduced emissions. An Issues report points out that vehicles using alternative technologies prevent environmental damage and reduce possible health threats to people.

Electric cars are powered exclusively by electricity instead of gasoline. The car has rechargeable batteries that must be connect to an electrical source to refuel. 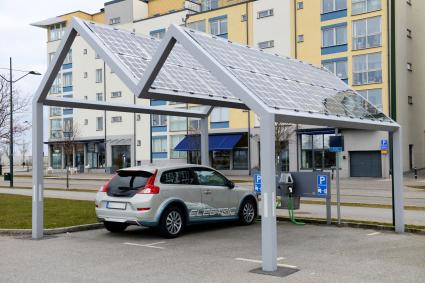 In the past, major automakers would not commit to producing this type of vehicle since the battery charges had very limited driving ranges before needing to be recharged. However, newer battery technology has made electric cars a cost-effective option for many people. Modern electric cars have an increased energy storage and require shorter recharging times.

Hybrid vehicles use a combination of electricity and gas. These have an electric motor as well as an internal combustion engine, which cuts gas consumption. There are cars, SUVs, vans, trucks, and scooters that run on this technology.

Solar powered cars have been on the roads since 2014. They run 500 miles on a single charge and are made for daily use. Falling prices could make this the car of the future according to Renewable Energy World.

Hydrogen fuel cell cars are based on a new technology that uses chemical energy from hydrogen fuel, and were on sale by early 2017 according to a 2017 Los Angeles Times report. However lack of customer awareness, dealers and fuelling stations means it is restricted to California as yet.

Compressed air cars already have prototypes tested where vehicles run entirely on compressed air or as hybrids with bioethanol or diesel. In 2015, actor Pat Boone pitched AIRPod to Shark Tank. AIRPod cars can be reserved, according to Zero Pollution Motors, at a cost of around $10,00.

Energy Use Can Reduce Air Pollution

There are several other ways to reduce air pollution. These require personal changes that can help reduce individual impacts.

Climate change, caused by emissions of greenhouse gases, is blamed for producing global warming. The solutions to this complex problem requires governments, industries, communities, and individuals.

Some indirect measures can be useful to tackle air pollution.

Many sources of water pollution start on land, and make their way into open waterways, groundwater and ultimately to the oceans. There are several ways to stop water pollution that are very easy.

To help prevent topsoil pollution, and its effects, businesses and governments need to be involved as much as individuals as the main cause of land pollution is industry and agriculture driven. Tackling the sources of land pollution means dealing with:

Reasons to Stop All Pollution

Pollution affects all the elements of an ecosystem, including air, water and soil. Pollution kills 1.7 million children less than five years old each year, accounting for one-fourth of all deaths in this age group according to a 2017 Guardian report. These deaths are the result of "toxic air, unsafe water, and lack of sanitation."

Sometimes a single agent like use of chemical fertilizers causes nutrient pollution affecting air, soil and water, as the EPA's Nutrient Pollution report explains. Restriction of its manufacture and use can reduce 10% of greenhouse emissions points out Mercola. So controlling a single factor can reduce many forms of pollution. That's why it's important to look at the various forms of pollution and end them.

Unraveling the Mystery of Stopping Pollution

Stopping pollution is a complicated issue that takes the effort of big industry as well as individual lifestyle changes. However, no change is too small when it comes to individual efforts. Many times controlling one cause can have a positive effect on multiple fronts. Be proactive in stopping pollution because the best way to influence others is by example.