Green energy is touted by many as the last hope of all future industries and the only way for those with eco-friendly consciences. LoveToKnow editor Sally Painter had the opportunity to discuss these ecological solutions with green energy investor, author and entrepreneur Tom Rand, CEO of VCi Green Funds and Planet Traveler.

LoveToKnow (LTK): You have created The Planet Traveler that is known as the Greenest hostel in North America. What inspired you to undertake this project?

Tom Rand (TR): An old friend of mine, who is in the business, wanted to take on a much larger building and renovate it into a state-of-the-art hostel for young people. He needed a financial backer, and approached me. My own career is dedicated to moving the needle on carbon, so I responded that I'd be interested if we attempted to build one that was a really ground-breaking green construction. We then set the goal of building North America's greenest hotel, Planet Traveler (PT) as a way of combining our two visions.

I knew nothing about the real estate sector when we started, so the project was a chance to learn from the ground up (literally!) what technologies could deliver the energy savings, and do it at a profit. At the end of the day, my motivation on the carbon issue is driven by an acute awareness of the severe impending stress climate change will place, not just on the environment, but also on the economic, social and institutional structures that underpin our industrial, globalized economy.

Not only did we reduce our carbon footprint by three-quarters, but we are wealthier for it. The energy savings more than offset the loan payments. It isn't rocket science, and that's what we're trying to tell the rest of the world. It is possible to make deep cuts in carbon, and be better off financially. The real estate sector is really, really low-hanging fruit and that's what PT is all about.

LTK: What were the various green technologies you used in your building and why did you select those specific ones?

TR: We use pretty standard stuff, very little technology risk here, what we've done that's unique is to combine them all in the same building. We have geothermal heating and cooling, solar thermal to pre-heat the hot water, solar PV for electrical production, we use a heat-exchanger on the drain-water to capture the heat before it goes down the drain, very high-efficient LED lighting, good insulation and smart thermostats. All of these technologies were chosen because they deliver on energy/carbon savings, have a well-identified pay-back and very little technical risk.

LTK: What were some of the obstacles you had to overcome in order to proceed with your plans for this commercial building in a downtown area?

TR: The main obstacle had to do with the fact that we have no ground, or surface area, under which to bury the geothermal pipes. Geothermal heating and cooling works by transferring heat to and from the building, into the ground, instead of producing heat and cool using boilers and air-conditioners. It does this by pumping a fluid through pipes that are buried at least ten feet or so down in the ground. It's extremely efficient, and is responsible for at least half our energy savings.

There is a city-owned laneway running alongside the building, and so we approached the City of Toronto to allow us to bury the pipes beneath that laneway. At first, they had no idea what we were talking about,but once they figured it out they were very helpful. As a matter-of-fact, not only did they allow us to bury our geothermal pipes under City property, but have set up a task force in response to this project to establish ways to open up parks and laneways throughout the City of Toronto for geothermal. That is, I believe, a world-first in terms of a municipality acting proactively to enable building owners to act as their own heating utility. Hats of to our former Mayor David Miller!

LTK: In your business connections, how receptive would you say the average company is to a green energy commitment? What are some of the issues that prevent companies from embracing green energy?

TR: Most companies are now ready to embrace clean energy. With a few exceptions, the management of these companies are beginning to understand clean energy exposes them to more opportunities, and less risks going forward. But at the end of the day, most companies do not view clean energy as their core business, and are happy making small incremental changes. What we need is policy: a price on carbon. Then the economic signals under which companies operate will be crystal clear, and so too will the motivation to de-carbon. Only a price on carbon will unlock the profit motive.

LTK: Can you explain a little about the Energy Internet and what this means?

TR: The Energy Internet is really a continent-wide dance of energy. Multiple clean sources in many different places are all connected together on a continent-wide grid, and these sources are balanced against a changing load and are also backed up by energy storage. That's how you make clean energy reliable. When the wind dies in one location, it might pick up in another. When the sun goes down over the American Southwest, the tides turn on the east and the hydro, biomass and geothermal plants all pick up. Load is effectively and intelligently matched to variations in supply. Excess clean energy at night is stored, perhaps in ultra low-friction flywheels, maybe in giant underwater compressed-air energy farms. But the whole thing, thousands of sources of energy, is managed as a resilient, intelligent energy network.

LTK: What is the biggest misconception the general public has about alternative green energies?

TR: That they are not affordable or effective. We are richer as hoteliers for lowering our carbon footprint, not poorer. The energy savings more than cover the loan payments for the energy retrofits and so we are cash flow positive on day one. Also, it's not like we lowered our carbon by a small or incremental amount - we slashed the carbon footprint of the building by three-quarters. If all the buildings did what we did, we more than meet Kyoto commitments and our national economies would be more, not less, competitive as a result. 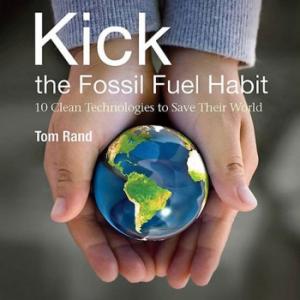 LTK: In your book, KICK the Fossil Fuel Habit, 10 Clean Technologies to Save Our World, you have a chapter titled, A Possible World in 2050. What do you consider is the first thing that would need to happen in order for the world to actualize this timeline? Or, is there a single act or change that would serve as a catalyst in order to steer the world in this green direction? If, not, please explain further.

TR: Make no mistake, de-carboning our economy will be the single largest and most difficult infrastructure build in human history, and this needs to be accomplished in the fact of what is becoming increasingly irrational skepticism in the public as to the need to to so. The first thing we need to do is understand this is not negotiable, that lowering carbon is not an optional task. This is urgent and necessary, and we need an adult conversation about what's coming. Because while individual building owners like me can go ahead on our own and make a real difference, what we need as an economy is good, smart policy.

Governments need to send strong, coherent and long-term pricing signals into the marketplace to enable this transformation on a large scale. A price on carbon, for one. There are other policy ideas - greenbonds.ca for example - but the single most effective tool is to price carbon emissions. There are ideologues who maintain the government should leave the economy alone - but they ignore their own history.

Consider the Internet, micro-chip, aerospace and even the auto sectors. These strategically important markets were all created by government intervention in the marketplace whether it's through initial procurement or the building of the interstate highway system. Clean energy is no different. Countries that figure that out first will reap massive economic rewards, those that don't will be stuck buying clean energy technology from abroad. But we live in a democracy, none of this will happen without the public demanding it. That takes education. That starts with a public, adult conversation about climate change.

LTK: If a reader wanted to use one of the green alternative technologies that you used in your hostel, which one would you recommend? Why?

TR: They all work well, in different ways, so it's hard to pick just one. That said, geothermal heating and cooling is doing the lion's share of the work. If a building owner has the capital to do it, geo is by far the most effective ways to lower energy use.

A Special Thank You to Tom Rand

LoveToKnow would like to thank Tom Rand for taking time out of his busy schedule to share his thoughts and experience with green energy.