The declining number of bees in the past decade has been cause for concern among environmentalists and governments alike. This is not surprising considering the services they offer to ecosystems and human welfare.

The Guardian reports that there are 25,000 species of bees in the world. Only four make honey, and were introduced by the Europeans to North America and Australasia, although a USDA Forest Service and Pollinator Partnership publication notes that there are thousands of other bees, from bumble bees to carpenter bees. Most of these are native bees. There are 4,000 species of them in the U.S. alone. 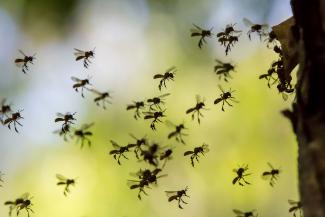 The Guardian writes that most of the bee species are solitary and live alone. Others live in colonies. Bumble bees colonies are 250 large, and honeybees can vary between 10,000 to 50,000 individuals. Solitary bees raise only one generation of offspring each year. However, those living communally in colonies have well defined social roles and work distribution, where many generations of offspring are collectively raised. Bees forage and feed on nectar and pollen from flowers. So colonies of bees need more and longer access to food, according to the Michigan State University.

While the bees forage flowers for nectar, a calorie rich sugary liquid, they pollinate flowers. When bees land on a flower and extract nectar, the hairs on their legs and back get covered by pollen produced by anthers. Bees tend to visit flowers of the same kind, and when they visit the next bloom the pollen is brushed on the stigma. This results in cross-pollination and is necessary to form healthy viable seeds explains the Michigan State University.

Though some plants can be pollinated by wind or water, up to 80% depend on animals for pollination. Insects, including bees, are the main pollinators points out Food and Agriculture Organization FAO. A 2016 publication in 'Proceedings of the National Academy of Sciences of the United States of America', found that native and honey bees were responsible for 61% of all pollination, and only 39% was by non-bee insects like flies, wasps, beetles, and butterflies.

It is their role as pollinators that makes bees invaluable for human economy and ecosystem functioning.

Estimates of global economic benefits from bee pollination vary, and were pinned at "€265bn in productivity due to pollination" by a Greenpeace report (pg. 14). This translates from Euros to U.S. dollars as approximately $280 billion dollars. 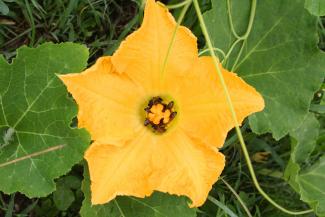 Bees and insects pollinate 84% of the crops, about 400 species of vegetables, nuts and fruits that humans consume. Bees alone pollinate a third of all the food people eat according to the Michigan State University.

Tomatoes, watermelon, cucumber, berries and sunflower are best pollinated by bumblebees, apples and blueberries by mason bees and shaggy fuzzyfoot bees, and pepper and canola by carpenter bees according to Bee Culture, as it improves produce when compared with pollination by honeybees.

However, the native bee species are also involved in pollination. Wild bees and other insects are better pollinators than honey bees, a worldwide study reported in Science found.

However, the native bee species are also involved in pollination. Wild bees and other insects are better pollinators than honey bees a worldwide study reported in Science found. Another scientific study conducted with several crops and in different ecosystems around the world, reported that wild bees are just as important as honey bees in a publication from PNAS, or the Proceedings of the National Academy of Sciences of the United States of America (p. 1). A 2015 Nature Communictions report states that contributions to crop yields by wild bees was $3,251 per hectare, compared to $2,913 by commercial bees. Interestingly only 2% of wild bees species pollinated crops even though those 2% did around 80% of the "crop visits".

Other Crops Indirectly Dependent on Bees

Many crops may not need pollination for their produce like cotton or hemp, nevertheless they need bees to produce seeds for future production. So they are indirectly dependent on bees notes Bee Culture.

Besides crops, bees also pollinate pastures, and crops like clover, alfalfa, and beans necessary for dairy and beef cattle note Michigan State University. These crops are likewise necessary for other livestock points out British Broadcasting Corporation.

Bee Culture reports alfalfa is pollinated by native leafcutter bees. Without them and honeybees, there would be a 50% reduction in dairy products like milk, and cheese, according to Whole Food Markets. So bees are important in maintaining the food chain by increasing production of food for many livestock that people consume. 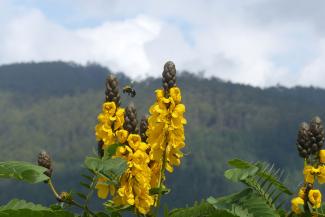 Bee pollination of wildflowers and trees in forests has important consequences.

Not only is pollination necessary to maintain sustainable levels of seeds for future generations, the cross-breeding of individual plants growing far apart increases genetic diversity. In the absence of bees, many plants are capable of setting seeds from their own pollen. However self-pollination produces offspring that are not healthy, and not diverse.

"Bees and other insects pollinate 95% of the canopy and 75% of the subcanopy" in the biodiversity rich tropical forests, according to Institute for Agriculture and Trade Policy. Issues surrounding rainforest destruction matter and bees can help keep the biodiversity flourishing.

In addition, the wild plants that bees pollinate are crucial for many ecosystem services like prevention of soil erosion, carbon sequestration, providing home and food for wild animals, points out Bee Culture. In fact, the proper functioning of any ecosystem is dependent on its pollinators.

Other Products From Bees

Besides its services as pollinators, there are many products bees produce for which they are commercially reared, according to The New Ecologist.

Due to a combination of chemical pesticide use, parasites, virus and habitat loss, honey bees and wild bee species are declining. In the U.S., 40% of colonies die every year points out The Guardian. It would be difficult to replace the bees, and their disappearance which can threaten food security, has already produced significant economic loss. It is therefore necessary to protect bee habitats, and increase organic farming to stop their decimation.

0
Comments
© 2006-2020 LoveToKnow, Corp., except where otherwise noted. All Rights Reserved.
Why Are Bees Important?