A watershed is a geographic region defined by the body of water that a given area drains into. Every inch of the planet is in one watershed or another, but knowing which water shed you are in is a powerful tool for understanding the relationship of where you live to the larger ecosystem.

To better understand what a watershed is, it's helpful to visualize the roof of a house:

A pitched with roof with just two sides provides a very simple visualization of a watershed. If it was a more elaborate home with multiple gables and rooflines angled in different directions and a more elaborate system of gutters, it would more accurately resemble actual landforms where water flows down a hill in one direction, enters another drainage area, flows down to join another and so on.

Thus the shape of valleys, plains, hills and ridges is what defines a watershed. Ridges are the dividing lines where a drop of rain must fall into one watershed or another. The hills and plains are giant catchment areas that funnel rainfall over the landscape into tiny drainage areas (like little valleys), which meet with other small drainage areas that slowly coalesce into larger streams and eventually into large rivers at the bottoms of enormous valleys. 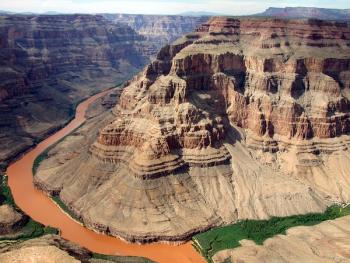 Imagine the Grand Canyon in Arizona, for example, which is formed by the mighty Colorado River. It collects water from much of Colorado, Wyoming and Utah before draining almost the entire state of Arizona and dumping it all into the Sea of Cortez in Mexico.

The key to understanding watersheds is to remember that water always runs downhill and ends up combining with water from other parts of the watershed to form larger and larger bodies of water until the sea is reached.

A Matter of Scale

The water that falls onto your roof eventually ends up in a creek.

The Mississippi watershed covers an enormous swath of the continent, making it the largest watershed in North America. Other watersheds are much smaller, however. In places where there are mountain ranges right on the coast, water has only a short distance to flow before it reaches the ocean.

Understanding the definition of a watershed is more than just a geography lesson. This is because everything that goes into the water as it moves through a watershed becomes concentrated downstream, affecting other communities. Everyone lives downstream from somewhere, so understanding watersheds is part of raising awareness about water pollution and the interconnectedness of all things on the planet. 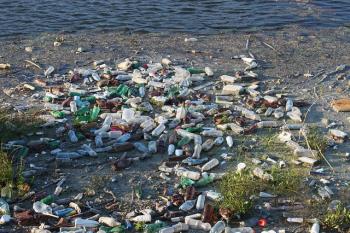 Water has a way of picking up and carrying off any contaminants or trash that it runs across. All those drips of oil from leaky transmissions that cover every shopping center parking lot mix with rainwater when it falls and flows into storm drains, which in turn flow into the nearest waterway.

The same is true for everything you put down the drain in your house. Sewer lines carry it away to the water treatment plant which cleans the water and then deposits it into the nearest river. Somewhere downstream another city obtains its drinking water from the same river. Though wastewater treatment plants do a good job of cleaning up wastewater, they cannot remove all the toxins which is why it's important to not pour things like paint down the drain.

Fertilizer and pesticide runoff from farms and front lawns eventually drains into a creek or river, mixing with the pollutants that run off of roadways, as well as pollutants from industrial sources and those that pass through the filtration processes at wastewater treatment plants. At worst, the result is a toxic cocktail that makes the water unfit for drinking or swimming in. Aquatic ecosystems also suffer profoundly in the process.

What You Can Do

The first step in combatting water pollution is to be more mindful about what you put into the watershed.

In many areas there are local watershed organizations that monitor water quality and work to clean up polluted or trash-filled waterways. Adopt-A-Stream is a national program of this nature with affiliate groups that take care of small watersheds all over the country. If there isn't one in your watershed, you could be the person to start one.

Knowing what watershed you are in and seeing yourself as one of its caretakers is a matter of pride. There are many ways to find out which watershed you are in, starting with simply asking people in your community. You can also look at a map and find the nearest creek or river to where you live and follow it downstream to see which larger watershed it becomes part of.

However, every state and many localities have websites that can help you pinpoint exactly which watershed you live in. The US Geological Service hosts a nationwide watershed map that shows the major watersheds in the country and allows you to click on them to zoom into smaller and smaller sub-watersheds.

Knowing your watershed is one way to feel connected to the natural world where you live and is also a way to connect with other people who share an interest in the environment. Political boundaries rarely follow watershed boundaries, but the latter provides a refreshing way to consider the landscape and the relationship of human society to it.

0
Comments
© 2006-2020 LoveToKnow, Corp., except where otherwise noted. All Rights Reserved.
Resources, Advice & Tips for Covid-19
Read More
What Is a Watershed?