According to the Oregon Forest Resources Institute (OFRI), clear cutting is the process by which all the trees in a given section of a forest are logged at once, with only a small number of trees left standing. While OFRI indicates that the trees in question are replanted after two years, the replanting does not undo all the damage that clearcutting can cause.

The trees removed during a clearcut were part of the local ecosystem. According to the OFRI, some of the animals that depended on the trees may be displaced as a result of clearcutting, and they may have to find new habitats. The local flora may also fail to adapt. The World Wildlife Fund (WWF) says that most animals in this situation will fail to adapt to new habitats, and they will become that much more vulnerable to predators.

Clearcutting can have complicated effects on local ecosystems, however. According to the Forestry Department of the Food and Agriculture Organization of the United Nations (FOA), the simple industrial processes involved in forest utilization can leave different ecosystems more vulnerable to invasive plants and animals.

FOA alludes to specific cases where invasive species replaced indigenous ant species as an indirect result of clearcutting procedures. The loss of even a few indigenous species can alter the entire balance of an ecosystem. It can take years before the ecosystem in question finds a new normal.

As Keisha Raines at Save the Sierra indicates, almost anything that removes a large number of trees is going to have some effect on carbon dioxide levels since trees function as effective carbon sinks. Clearcutting on a large scale could have a significant impact on global climate change.

According to the WWF, trees can essentially act as anchors for soil. Removing those anchors can make the soil more vulnerable to erosion. Raines also points out that removing trees during clearcutting can also take away the bacteria, worms, and fungi that maintain and treat the forest soil, and removing these organisms may also put other forest plants at an increased risk of illnesses. The degradation of soil is one of the most pressing environmental issues facing society at present and clearcutting only contributes to it. 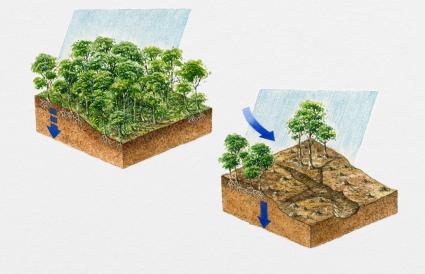 According to Ebbetts Pass Forest Watch (EPFW), while clearcutting is potentially economically beneficial for timber owners, contractors and employees do not receive the same benefits. The EPFW points to data that suggests that the recreation associated with national forests may bring in 31 times as much income as logging these same national forests in the United States, and recreation may yield as many as 38 times as many jobs.

As a result of clearcutting, a formerly vibrant forest can look diminished and sparse. The aesthetic value of forests has economic value since beautiful forests can increase the property value of a given area and attract tourists. The EPFW talks about how the natural beauty of the Sierra Nevada forests is a tremendous draw in terms for both tourists and people interested in relocating.

Recreation is one of the ways in which the habitat loss caused by clearcutting can intersect with other consequences of clearcutting since people interested in hunting or fishing for certain wildlife may lose the opportunity to do so as a result of clearcutting. While the value of natural beauty can be difficult to quantify, the EPFW refers to statistics that suggest that scenic highways may bring in as much as 32,500 dollars per mile.

While there certainly are many negatives to clearcutting, there are decided positives that can be very beneficial to ecosystems. According to the Sierra Logging Museum before a clearcut harvest is approved, several requirements must be met that include. "reforestation, erosion control, wildlife protection, and water quality protection." Westmoreland Woodlands Improvement Association (WWIA) states the perception of clear cutting being harmful to the environment is incorrect. The association points out: 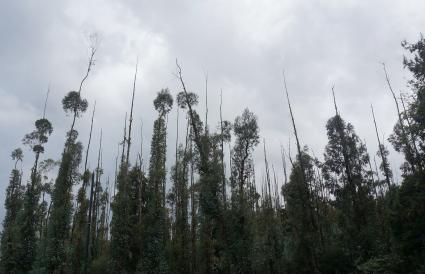 Clearcutting provides a way to clear stunted and diseased forests and afford the opportunity to replant and produce a healthy growing forest. The clean slate offers the ability of artificial regeneration with a planned forest that includes a variety of species. In natural reforestation, plants that previously didn't grow underneath the forest canopy will thrive and provide new food sources for animals while encouraging new wildlife to move in.

According to WWIA, it's a popular misconception that clearcutting increases soil erosion. The organization points to poorly planned road systems as the biggest cause of erosion, not clearcutting. Clearcutting is said to benefit both soil and water. These benefits include:

While some of the negative effects of clearcutting are obvious, there are beneficial and positive ones, especially for unhealthy forests. Clearcutting can transform an area in several ways that can be a mix of good and bad. Before making a decision about clearcutting your property, consider all these aspects.