Droughts can be absolutely devastating for local people and ecosystems. Given the dependence that all living things have on water, the consequences of pronounced and prolonged water shortages can be widespread and complex. Drought effects and management can be as complicated as the droughts themselves.

According to the California Department of Water Resources (CDWR), a definitive standard for the starting point and ending point of a drought has not been established. However, the incidence of a drought becomes clear as the effects begin to take shape.

Drought Impacts on the Local Environment

Few ecological problems can cause as many environmental problems as droughts. Wildlife suffers during droughts, and the entire landscape can change through the widespread effects of droughts.

The NDMC indicates that droughts reduce the quality of soil and promote soil erosion. While some habitats are merely damaged by the effects of droughts, the NDMC says that some habitats, like wetlands, can be lost altogether.

According to the National Climatic Data Center (NCDC), areas affected by droughts are often much more likely to experience wildfires. The NCDC indicates that wildfires themselves can have their own set of negative economic, social, and environmental impacts, which demonstrates the ways in which droughts can trigger additional devastating environmental problems. 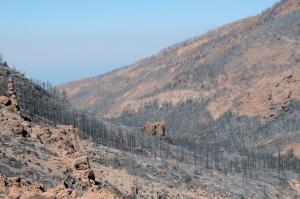 The California Academy of Sciences (CAS) indicates that the wildfires caused by droughts can disrupt animal habitats, including depriving them of sustenance and shelter. Animals living under drought conditions don't always hibernate or migrate when they should, according to the CAS. For example, the CAS says that streamflow problems affect the reproductive and behavioral patterns of fish species in drought-stricken areas.

The California Department of Fish and Wildlife (CDFW) indicates that wild animals make more contact with humans during droughts, since their normal feeding grounds have been disrupted. Some of these animals may pose a direct or indirect danger to humans, as predators or disease vectors. The CDFW tries to dissuade people from trying to help wild animals directly. The increased contact between wild animals and humans only disrupts ecosystems further.

According to Southwest Climate Change Network (SCCN), trees become deprived of moisture more quickly during droughts. Among other things, the SCCN claims that as a result, trees become more vulnerable to predators. Trees that are already living with degraded soil will be facing a number of other threats during droughts, as will many other types of plant life. Plants that are in symbiotic relationships with animals will suffer when those animals are affected by the drought conditions, as well. Drought can affect ecosystems at all levels. 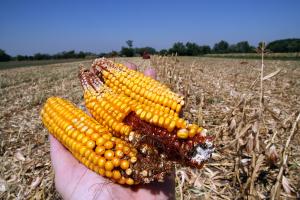 Droughts can severely disrupt an area's agricultural production. The UCS points out that even the time of the year at which a water shortage occurs can make all the difference in a farmer's crop yields, given the cyclical nature of raising crops.

The NCDC indicates that livestock can be affected as well, since animal feed and water is more expensive during droughts. As dairy production is negatively affected, dairy products will become more expensive, according to the NCDC. Similar consequences can be seen throughout the agricultural industry.

The Texas Water Resources Institute (TWRI) reports that droughts can have a tremendous negative impact on the tourism industry. The recreational use of water in general is threatened during droughts, according to the TWRI. The people that depend upon these industries for a living directly or indirectly will quickly feel the effects of droughts.

The Center for Disease Control and Prevention (CDC) notes that droughts can raise the prevalence of infectious diseases in many different ways. Water shortages may reduce the incidence of hand washing, for one thing, but farmers are more likely to rely on contaminated recycled water when droughts occur, according to the CDC. The CDC even indicates that bacteria and other disease-causing organisms flourish during periods of low precipitation. The NCDC also indicates that heat stroke is more likely to occur during droughts.

Over the long-term, droughts can alter entire communities. CNBC reports that people may have to be moved from the state of California altogether if its drought does not improve, which is a common practice in situations like these. Moving an entire large population like this can have incalculable effects on local cultures and ways of life, not to mention the economic consequences. Droughts have the power to change history.

Each area affected utilizes different strategies for coping with drought.

The CDWR says that as surface water declines during droughts, groundwater is used to meet agricultural and urban water needs. NatGeo reports that in California, groundwater pumping has helped the agricultural industry replace three quarters of its lost water resources. The UCS says that drought-stricken areas also promote water conservation and the efficient use of water.

According to NatGeo, the construction of desalination plants is a potential long-term drought solution, as is the use of pipelines that bring in water from elsewhere. However, NatGeo also stresses the need for solutions that will produce quicker results.

Drought-affected areas also take steps to protect the local wildlife. The CDFW reports that there have been efforts towards species conservation involving translocation and breeding threatened animals in captivity. The CDFW has also engaged in public outreach and education with regards to wildlife.

People living in drought-affected areas will often have to reduce their residential water consumption. Some residents will be forced to do so economically, while others may do so voluntarily. According to the UCLA Newsroom, the East Bay Municipal Utility District was able to make a five percent reduction in household water consumption through education. Citizens making lifestyle changes and using their own water reserves responsibly can help address the problem on a personal and societal level, although broader changes will also be needed.

The UCS stresses the need for more strategic drought management methods that take into account the possibility that droughts are going to be an increasingly common problem due to climate change.

Many areas have a great deal of experience with drought management. However, future societies may experience droughts on levels that are unknown to those currently living on Earth. The drought management techniques that people develop now may make all the difference in the future, but dealing with very sustained and widespread drought conditions may have unpredictable effects on societies everywhere.