Pesticides are toxic chemicals. Their ability to kill is unfortunately not limited to the targeted organisms, so pesticide residue can cause problems for people, plants, and animals. Though the dangers of pesticides use were long known, the sheer enormity of problems they cause has been the recent focus.

People who use them are at particular risk, as 95% of pesticide exposure is dermal or through the skin, which happens during application of pesticides according to Penn State Extension. People are also exposed to pesticides through "inhalation (lungs), oral (mouth), and the eyes", explains Penn State Extension. The effects can be acute or chronic and depend on the chemicals and the amount of exposure or dosage that people have taken in.

Pesticides have not surprising become a major agricultural occupational hazard as pesticides are an important component of industrial agriculture.

Acute effects can vary from mild skin irritation and coughing to even death in severe cases. A 2017 United Nations report states that there are 200,000 deaths every year due to acute poisoning worldwide, of which 99% are in the developing countries. This happens because chemical pesticides that are banned in developed countries are still in use in the developing countries due to weaker government regulations, notes World Health Organization (WHO).

Many of the chemicals are sold by large multinationals from developed countries who take advantage of these weaker regulations and corruption in the governments to continue sales of their products. These deaths could be preventable. 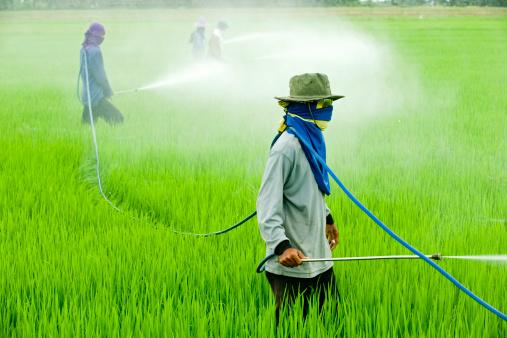 Chronic effects due to long-term exposure are more hard to identify, according to Hesperian Health Guides, as they manifest long after the exposure, even years later. Moreover, farm workers move making it hard to trace the cause as these diseases can also result from other causes. Some of the chronic effects of pesticides can be birth defects, cancer, genetic changes, blood disorders, nerve disorders, endocrine disruption, and reproduction effects', coma, Alzheimer's and Parkinson's diseases, hormone disruption, developmental disorders, sterility and death according to Hesperian Health Guides and the 2017 United Nations Report.

It is necessary for people who use pesticides like farmers or gardeners to protect themselves with face masks or gloves to prevent long-term exposure.

Pesticides in the Environment

Pesticides do not remain where they are applied. They spread through wind drifts to neighbouring areas, leach into soils and are carried by runoff into waterways increasing their impact on non-target organisms, points out a scientific study. 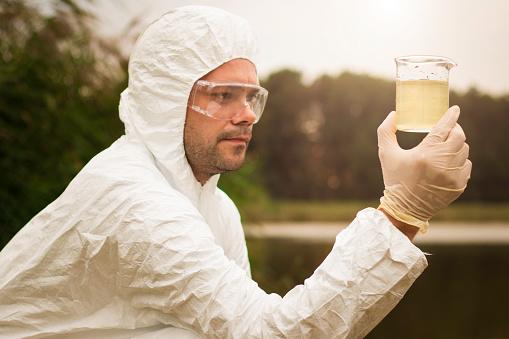 In 2006, at least one pesticide was found in all the streams studied in the US, even though it was less in ground water according to an US Geological Survey Report. By 2011, 60% of agricultural streams in the US had pesticides above safe levels reports Pesticide Action Network.

Once pesticides enter the water system any crop or garden irrigated by them will have pesticides. Moreover, pesticides reach areas far away from the source like city centers, and also affect people who do not use any chemical pesticides. Once they are in the drinking water it is also difficult to get pesticides like neonicotinoids out, as it dissolves in water and cannot be filtered out, so the water is polluted until the chemical breaks down, which can be many years.

The type of pesticide has an influence on the effects produced by the pesticides in soil, according a scientific review (pg. 3 ). Thus soil fumigants are the worst, impacting soil diversity to the greatest extent. Several pesticides persist in the soil for decades prolonging their impact. This is also true for herbicides used with GMO crops. Some of the effects observed are:

Microbes are necessary for litter decomposition and nutrient cycling vital to maintain soil fertility. Without the beneficial microbes to keep the soil fertile, more fertilizers are needed to grow crops, or crops become weaker and more susceptible to diseases, with serious implications for crop and general plant health.

Moreover, some of the microbes are involved in degrading the pesticides, so if their functioning is affected it means pesticides remain active for a longer time in the soil, prolonging the negative impact on the soil ecosystem, according to the scientific review (pg. 1).

Once pesticides are in the soil, they ultimately leach into the groundwater. Many of the older and cheaper pesticides remain in the soil for decades WHO reports, increasing the chances of polluting entire groundwater reservoirs that are an important source of drinking water for people.

Impact on Plants by Pesticides 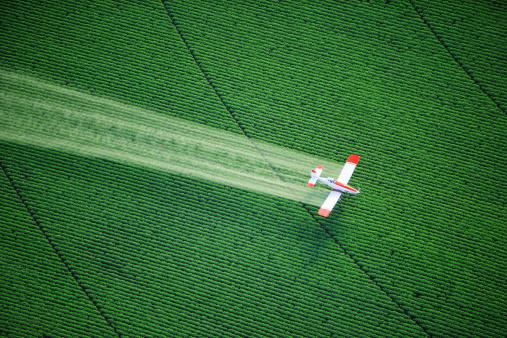 Of all the pesticides, wild plants are at risk from herbicides. There are two types of herbicides, selective and non-selective explains University of Nevada. As their name implies, non-selective herbicides are meant "to prevent plant life in general".

Selective herbicides also target a broad spectrum of plants, differentiating only between grasses and broadleaved plants, so they affect a wide range of plants too (pg. 2). When pesticides are applied by large machines especially airplanes it is difficult to confine the chemicals to the farm. They affect hedges, wild vegetation and neighbouring farms that may have plants sensitive to pesticides.

Herbicides can kill or disrupt plant functioning (for example, flowering functions), depending on how sensitive the plants are to the particular chemical. In Canada, 35 of 104 species in a woodland were affected, of which 13 were poisoned by herbicides notes a 2015 study.

This range of effects is called phyto-toxicity. Since plants have an important role to play in the ecosystem protecting and nourishing the soil, a loss of wild plants can hinder many other aspects of ecosystem functioning, notes University of Florida (pg. 3). Moreover, herbicides remain on plants, which are directly or indirectly the food source for the rest of the ecosystem, thereby poisoning animals. So the pesticides have a cascading effect on the whole ecosystem.

Danger to Wildlife From Pesticides

As in humans, pesticides can make animals sick or even kill them according to Pesticide Stewardship. They too show acute and chronic effects. Organochlorine insecticide DDT poisoning of bald eagles is an example of chronic effect. 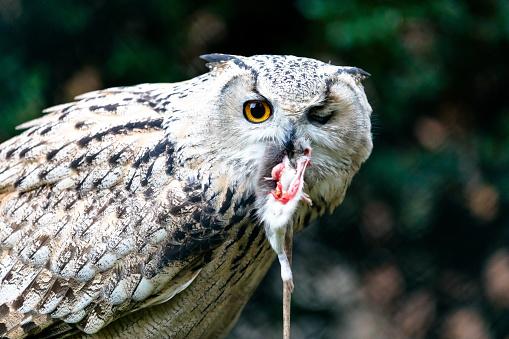 Wild animals can be affected by pesticides when they feed on plants affected by wind drifts, or when they eat other animals that have been poisoned by pesticides. This can happen through bio-accumulation and bio-magnification, where toxic chemicals ingested accumulate in an animal, and this concentration increases at each stage of the food-chain. Wildlife is also affected by drinking water from sources with pesticide laden runoff or groundwater contamination report Beyond Pesticides.

Insects are one of the biggest group of wildlife that have been affected by pesticides as many feed directly on plants that are covered by pesticides, not just in areas sprayed by them but also plants contaminated by wind drifts, note the National Pesticide Information Center. There are many recorded instances of pesticide effects, both small and large on insects and their diversity.

These insects are crucial for the human economy. Bees are necessary to pollinate around 100 crops in North America, and their declining numbers can affect food production and security, and lead to an estimated 24 billion dollar loss, according to the Guardian. Many predators among insects that feed on crop pests and control them naturally are being killed, making the pest problem more severe.

Insects also have an important place in the food-chain, as they provide nutrition for birds and several other small mammals, whose populations and health can in turn be affected.

Scale of the Problem

It is the over-reliance on few chemicals that has hastened the development of resistance in plants and insects. That these are broad spectrum chemicals affecting not specific species but a wide class, makes them toxic to entire ecosystems.

These chemicals were tolerated because people thought they were a necessary evil to boost crop production to feed expanding populations. Most times, more than the prescribed amount of pesticides were used believing "more was better". Subsidies by government only encouraged this behavior by making them affordable.

Even though there is enough research to show the effectiveness of natural alternatives and Integrated Pest Management, industries keep lobbying governments to continue the sales of their lethal products for profit.

The group that is worst affected by residential use are children, who play on lawns, with pets and on indoor surfaces where different pesticides are used. Since they are growing they more susceptible to the deleterious effects of pesticides. Fifty percent of lifetime exposures (pg. 1) happen before children are five years old. The risk to farmers' children is greater, because of pesticides' containers lying around in the household/farm says Penn State Extension.

Pesticide Use Higher in Gardens 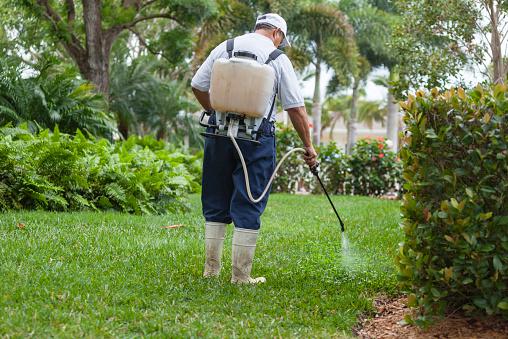 In 2014, the New York Times covered a United States Fish and Wildlife Service report that found use of pesticides was ten times more in residential gardens than in farms on an acre basis. Though each person uses a small amount, the total amount of pesticides that ends up in the environment is enormous.

When people think of pesticides, they associate them with farms. The widespread use of these chemicals in daily life by the general public is overlooked. People place themselves, and their children and pets at risk by adopting short-term and fast methods of pest elimination. Therefore, many states are campaigning for stricter control of pesticide use by the US government to prevent health problems in people including children. It is advisable for people to research the side effects of products they use at home and in gardens.

Repeated use of a single pesticide can cause the target plant or insect to become resistant to it by artificial selection according to Michigan State University Extension. This means more applications of the chemical are necessary, but ultimately it is no longer useful in controlling the target pest.

Once a plant or insect develops resistance, a new pesticide has to be identified or developed, making the lifespan of pesticides short and an investment in their research and production expensive. If pesticides are expensive to develop, produce and use, the impact they have created is even more expensive to remove. In many cases this is impossible, leading to loss of human lives, and endangering wildlife and plants who are already stressed by habitat loss and other forms of pollution.

Time to Give Up Chemical Pesticides

The EPA has acknowledged that the risks of pesticide use outweigh its benefits. Furthermore, the Guardian reports on a UN conclusion that contrary to common belief pesticides are not necessary to end hunger, and feed current or future world populations. Given the number of natural and harmless options that exist to control pests, use of chemicals can be eliminated or decreased. Since individuals are responsible for a substantial amount of pesticide use, each individual action can have a positive impact the environment and health, by using natural alternatives.