Solar energy is a sustainable energy and is inherently more sustainable than fossil fuel energy sources. As a way of converting the sun's energy into electrical energy, solar panels make use of the single most sustainable resource on the planet - the light of the sun.

According to the United Nations, sustainability means "development that meets the needs of the present without compromising the ability of future generations to meet their own needs." Solar energy embodies this widely accepted definition of sustainability because the sun's energy can be used indefinitely without diminishing its future availability. Most experts agree that the sun is the most important source of renewable energy.

Solar energy is considered a renewable resource, as opposed to non-renewable energy sources, such as fossil fuels, which are finite. There is more than enough solar power to provide for all the energy needs of the planet, even if the Earth's population continues to grow and consume more energy, making it an important component of effort to combat climate change.

A study published in Scientific American found that in 40 minutes the amount of energy contained in the light of the sun that reaches the Earth is equivalent to the amount of electrical energy used on the planet in a year's time. 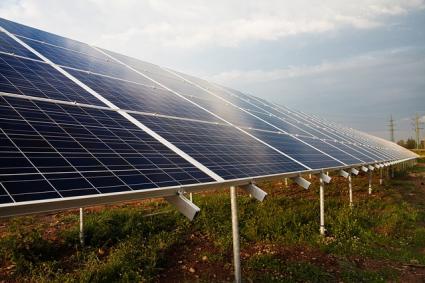 Fossil fuels cause pollution as they are consumed, while solar energy does not, which is another way that it embodies the principles of sustainability. Solar panels sit idly on rooftops or in large solar arrays, creating no waste products, noise or any other outputs - just clean electrical energy.

While yes, solar energy itself is sustainable, harnessing that energy is not completely free of any disadvantages and some of these relate to its degree of sustainability. However, these disadvantages pale in comparison to the positive potential of solar power as a sustainable energy source.

A major reason why solar energy has not become more widespread is that it is not yet economically sustainable. The up front cost of installing solar panels eventually pays for itself because they produce energy for free once they are up and running, but the ratio of costs to energy produced has remained too high for the average homeowner to afford panels, as well as for large scale applications.

Solar technology continues to advance, however, so it is expected that at some point solar energy will become more cost effective than non-renewable energy sources that, by nature, become more expensive as their availability declines.

While the sun is in an inherently sustainable energy source, some of the materials needed to make solar panels are not sustainable. Solar panels are built with rare minerals, such as selenium, that will eventually be exhausted if solar panel manufacturers continue to extract them at an accelerating pace.

This dilemma, too, is likely to be overcome with advances in technology that allow solar panels to be manufactured with more commonly occurring raw materials.

The Essence of Sustainability

Since the sun is expected to continue shining for several billion years, calling solar energy a sustainable power supply is a pretty safe bet. The challenge now is to figure out how to drive down the cost of solar panels to the point where it is also economically sustainable using more renewable materials.