While some food additives and preservatives provide nutritional benefits or improve food safety, others -- from dyes and flavorings to thickeners and whiteners -- are added for consumer appeal and have known or potential health risks. Consider the dangers of exposure from indirect sources your food comes into contact with as well. Your best defense is to avoid or limit eating processed, refined, packaged, or convenience foods.

The real danger of food additives and preservatives, natural or synthetic, is that no one knows what the true collective dangers are. The U. S. Food and Drug Administration (FDA) lists hundreds of approved additives, however there are few clinical studies to show if many of them are safe for human consumption. The studies that exist are often inadequate to assess the degree of risks.

Food additives and preservatives have been linked to the following, primarily in animal studies:

It is unclear if the adverse findings in lab animals can be translated to health risks in humans because there is not enough data on this question. The FDA allows some food additives that are linked to risks as long only small amounts are added. Lack of adequate or no human studies and inconsistent results leave many questions unanswered about the dangers of food additives and preservatives.

Dangers in the FDA Regulation

The FDA and the U. S. Department of Agriculture (USDA) are the main agencies responsible for food safety in the U. S. This includes substances allowed in agriculture and those allowed in food manufacturing, including products produced through bioengineering (genetically modified). The FDA regulates food additives and preservatives.

Concerns About the FDA Process

There are food additives and preservatives on the approved FDA lists that have never been tested or which are of concern to health professionals and other groups. The tested substances on the list that are linked to risks in lab animals may be assumed to be potentially harmful to humans but in what amounts is not known.

Independent groups such as the Center for Science in the Public Interest (CSPI) disagree with the FDA approval process. It appears that the FDA does not have the resources to regulate adequately substances that are added to the food supply. Rapid development of food technology and new substances added by the food and manufacturing industries likely make oversight more complicated.

Many of the substances on the FDA list were allowed on without testing because of long-standing use. Others are designated as GRAS (generally accepted as safe) and are therefore not tested but allowed in food processing. Many GRAS foods are inherently safe but the safety of many is uncertain. In the past substances, such as cyclamates, have been removed from the list when after years of use it became clear that they were unsafe.

Often the food industry gets to decide for itself what is a GRAS additive and tells the FDA that a substance is safe for use in foods and need not show proof. There are substances in your foods that have never been submitted to the FDA. The U. S. General Accountability Office in 2010 reported that there was inadequate oversight of these additives.

The 1958 amendment to the original 1938 Federal Food, Drug and Cosmetics Act (FD&C) Act prohibits use of any substances that are linked to cancer in lab animals or humans (the Delaney clause). Many substances linked to cancer are not approved, however there are some that are still allowed as a food additives or preservatives by the FDA.

Questions remain for certain additives, such as these three examples: 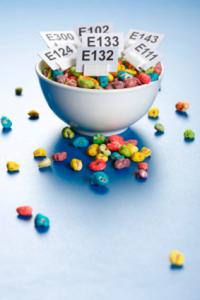 Several synthetic food colors such as blue and red dyes continue to have FDA approval in the U.S. These synthetic colors have been of concern for a possible link to attention deficit disorder in children.

A recent paper published in the British medical journal Lancet in 2007 showed stronger evidence of a link between synthetic food color and hyperactivity in children. These color additives are still added to processed foods in the U. S. Natural color additives, such as caramel, are also of concern for other health risks.

The FDA requires certain substances, such as sulfites and MSG to be specifically listed on a food label because of their known risks or side effects. However, some manufacturers often list other additives generically, for example, as "flavorings" or "spices" instead of by the specific name. Some of these are secret ingredients they prefer not to reveal to their competitors.

For example, MSG, which can cause headaches and nausea in some people, may be included in a product but disguised on the label as "natural flavor" or "hydrolyzed yeast". There are many other ways in which the origin of food additives get disguised under other names unknown to consumers.

The FDA allows substances that have known risks in animals or humans to be added to to foods as long as they are in small amounts. They conclude that most substances added to the food supply are too small in quantity to cause harm. The problem is that no studies have looked at dose-related effects of of these additives.

It is possible that, though in low quantities in foods, with prolonged use over years some additives could accumulate in your body and increase your risks. These substances may not be completely excreted and instead stored in small amounts, which over time may be toxic within your organs.

A single additive or preservative may be low risk but no one is exposed to just a single or a few chemicals. Together, substances can potentially be additive or interact with each other and produce side chemicals which may be more hazardous to your health.

There may be multiple substances in just one product, not to mention the many processed foods that you may consume. Given this, it is may not be possible to tell in the long which specific food substance caused your health problem. The lower the grade of a food, the more likely that there are multiple additives to try to enhance it and make it more appealing.

Chemicals can enter a processed food from chemicals not actively added during processing and refining of foods. This includes:

There is also danger from food additives and preservatives that enter the water supply from discarded foods or during the manufacturing process.

Given that few people can grow their own food, additives and preservatives prevent spoilage from microorganisms, moisture, air and natural aging of foods and extend shelf life. Added nutrients, such as folic acid, benefit the public's health. However, with the long list of synthetic and natural substances added to appeal to consumers, many lack benefit to your health and the risks may be unknown.

Because there is not enough information on the health risks of many of these substances, eat a healthy diet of whole foods, preferably locally grown, and limit processed or convenience foods. If you choose to consume some of these foods, read the bottom of food labels and learn about what you are eating or drinking. Be aware of additives disguised under different names and research any that you don't recognize.

2
Comments
© 2006-2021 LoveToKnow, Corp., except where otherwise noted. All Rights Reserved.
Dangers of Food Additives and Preservatives