The average American's carbon footprint per person in 2014 was 21.5 metric tons CO2 according to the University of Michigan. This an increase of 7% in 25 years. It remains the highest in the world since industrialization, but the picture is not uniform across the country or even within a region.

What Is a Carbon Footprint?

"Carbon footprint" is defined as the measure of greenhouse gases that one is responsible for creating, or units of carbon dioxide that are produced in tons per year. These gases are generated by various activities including transportation, home energy costs, diet, recycling practices, and waste production.

How to Calculate Your Carbon Footprint

It is not necessary to learn a complicated mathematical formula to determine carbon footprint. Fortunately, there are many footprint calculators available online, such as Carbon Footprint's calculator. To determine footprint, enter details concerning home energy use, frequency and distance traveled by car and air, diet, and participation in recycling programs and amounts of waste generated. It is possible to calculate carbon footprint individually or based on the household.

People can compare their carbon foot to the averages based on location, food and income.

In terms of country total, though, the U.S. was no longer the country with the highest carbon footprint in 2014. It was responsible for 15% of the global population in this year and came second after China according to the Environmental Protection Agency (EPA). However the per capita carbon footprint of Chinese is less than half of the American carbon footprint at 7.6 metric tons CO2. In 2015, greenhouse gas emissions decreased slightly compared to 2014 due to warmer weather and less reliance on coal notes the EPA (Sources report).

Rural and Urban Differences in US

One of the biggest differences in carbon footprint is between rural and urban dwellers. Travel and size of homes are the main reasons why rural populations can emit twice as much carbon as their urban counterparts

You can compared these differences by using the interactive carbon footprint map by the University of Berkeley at CoolClimate Calculator. For example:

Contributions from food, goods, and services are nearly the same in both rural and urban areas.

All Cities Are Not the Same

UC Berkeley News has found that larger a city, is the larger is its suburb. People living in the suburbs are more affluent than those in the city center, so they have larger houses. Moreover, the sprawling suburbs means people are also clocking up more miles. Suburbs are thus responsible for 50% of household emissions in the U.S. New York City's suburbs, for example, are not as green as the city center. Manhasset, one of its suburbs in the Nassau county, has an average footprint of 72.4, and is double that of New York City. The emissions due to transport are four times that of the city center. Similarly larger houses means 2.5 times more emission than the houses in the city center, according to data from Berkeley's interactive map.

So the average carbon footprint of people in suburbs can be many times more than the national average carbon footprint. New York's suburbs are three times as polluting as the national average and more than even some rural areas like Giltner. Not surprisingly, a scientific study reported in Environmental Science and Technology in 2014 showed that suburbs produce approximately 50% of the total U.S. carbon emissions.

The two main sources of emission in cities, rural areas, and suburban regions are energy and transportation.

Agriculture accounted for 9% of the emissions in 2015, according to EPA, Sources. However, the type of food produced whether it is crop or livestock is an important criteria.

A 2014 scientific study found producing a meat-based diet released double the emissions as producing vegan food. An article in The Guardian points out that if people worldwide were to adopt a complete vegetarian diet, it could reduce carbon emissions by 63% by 2050, and by 70% for a vegan diet. Moreover, it is over-consumption of meat that is the problem. Eating less and healthy portions of meat can reduce carbon emissions too. 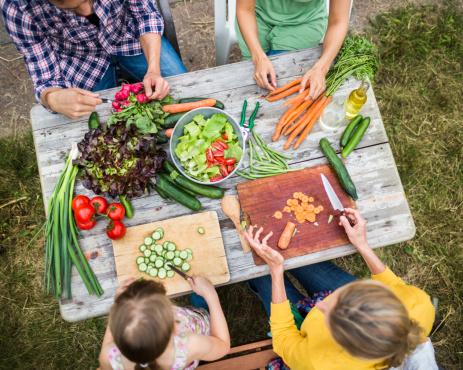 Sixty-eight percent of organic farms in Europe farms examined by a meta-analysis of 107 studies released less greenhouse gas emissions. They found that it was field and mixed crops producing grains, and dairy that had less carbon footprint than conventional farms.

Moreover, organic farming can help in sequestration of 100% of carbon emissions and store it in the soil according to a Rodale study reporting on an experimental trial. The carbon dioxide used by plants in photosynthesis is used to make cellulose and starch and distributed in the plant. Usually, above ground parts are harvested leaving roots in the soil (except in root crops and tubers), so that the carbon in them is stored in the soil. So organic food is also the better choice for reducing one's carbon footprint.

Oxfam reports that the "richest 10% of people around the world, have average carbon footprints 11 times as high as the poorest half of the population, and 60 times as high as the poorest 10%." This 10% of the world population is responsible for 50% of all carbon emissions. The difference widens when only the top 1% of the earners are compared with the poorest. These group's average footprint is 175 times larger than the lowest 10% (pg. 1).

There are differences between different parts in the emissions between the rich and poor. The top 10% in US emit 50 MCET, while India's top 10% emit 2.07 MCET. The U.S.'s bottom 50% emits 8.57 MCET and India's bottom 50% emits 0.42 MCET, according to Oxfam's Technical Report (pg. 10). So India 10% richest have an average carbon footprint that is a quarter of the poorest in the U.S. This highlights the fact that lifestyle is a major factor when it comes to carbon footprints.

Ways to Reduce Your Carbon Footprint

Whether one's carbon footprint is above or below the average, there are plenty of ways to reduce it and increase the quality of the environment. It is not necessary to completely change one's lifestyle, but to make subtle ones and live a "greener" lifestyle. With the increasing concern of climate change, there is a growing body of technology to address emissions in all spheres of life.

0
Comments
© 2006-2020 LoveToKnow, Corp., except where otherwise noted. All Rights Reserved.
What Is the Average Carbon Footprint?