Finding ways to save water will not only cut down on your monthly water bill, it is also part of caring for the environment. Water is a finite resource and as the Earth's population grows, it's important that every household and community find ways to make do with less. There are two main approaches to water conservation: reducing use and recycling water that has already been used.

Reducing your home's daily water intake doesn't have to cost anything. However, there are a number of plumbing projects that can contribute to the cause, some of which cost just a few dollars and are simple enough that anyone who knows how to use a wrench can accomplish them.

Replacing your plumbing fixtures with low-flow alternatives is a good place to start the process of reducing water consumption. For example, low-flow showerheads are those that use less than 2.5 gallons of water per minute.

These fixtures also include sink aerators, which only need to be unscrewed from the tip of a faucet and replaced with a model that allows less water to pass through when you turn on the tap. The same is true for showerheads -- it's as easy as unscrewing the old and screwing on the new.

There are also low-flow toilets that use less water for each flush (1.6 gallons or less versus 3 to 5 gallons) , including models that have separate buttons for the different types of waste being flushed, thus saving water on particular flushes.

A slow drip from your faucet can waste 20 gallons of water per day. Leaky faucets are caused by worn out parts in the valve inside the handle that turn the water off and on. Repairing the leak is often as simple as replacing a washer that usually costs no more than a quarter, though sometimes the entire valve stem has to be replaced.

If you're toilet 'runs', meaning you can hear water going into the tank at times other than after flushing, some of the internal components may need to be adjusted or replaced. Call a plumber for help if you are not familiar with toilet repair.

It's also important to check the plumbing under your house for leaks, in case you are unknowingly wasting huge amounts of water as a result of faulty plumbing. These leaks will usually require a plumber to resolve.

Besides shoring up your plumbing to reduce water use, there are innumerable ways to be more mindful of water use as you go through your daily routine. 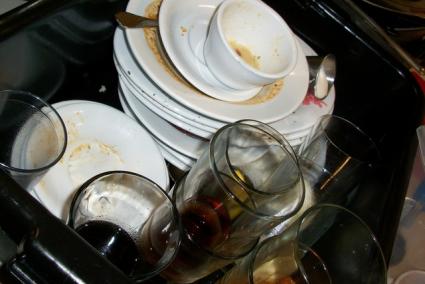 A plastic basin for washing dishes

Water that has been used for household purposes is called greywater (except for what goes down the toilet, which is called black water). The main way to reuse greywater is outdoors for irrigation.

It's possible to re-plumb your entire house to separate greywater from black water and funnel it into an automated irrigation system, but there are other, simpler ways to achieve the same goal, such as placing a plastic basin in the kitchen sink to prevent the water from going down the drain when washing the dishes or running the water for any other purpose. When the basin starts to get full, take it outside and use it to water your plants.

Similar principles apply to outdoor water consumption though the applications are quite different than inside the house. Up to 60 percent of residential water use occurs outdoors, depending on your location's climate, but unlike indoor water use, most of the things water is used for outside can be considered optional.

Some plants require much more water than others to survive. One of the most common landscape features -- lawns -- is one of the thirstiest. Cutting down on the size of your lawn or eliminating it altogether is one of the most straightforward ways to make a drastic reduction in water usage.

Native plants are always a good choice for landscaping because they are adapted to the local rainfall patterns and should not need any supplemental irrigation once established. In general, succulents and plants with small greyish leaves use the least water.

Other water conservation practices in the landscape include: 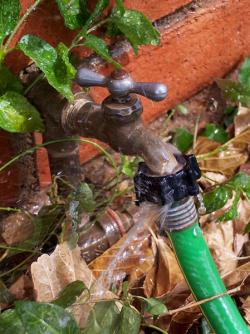 Washing the car and cleaning exterior surfaces are also big water-consuming activities. Instead of using a hose to spray off a deck, path patio way or driveway, consider a push-broom or an electric blower. When washing the car, use a nozzle that allows you to turn off the water when you're not actively using it. Alternatively, seek out a car wash that recycles its wastewater rather than washing your car at home.

Finally, in most places more than enough water for all outdoor use falls onto your roof each year, providing a valuable resource to tap into. Every inch of rain that falls on a modest 1,000 square foot roof equals 600 gallons of water. 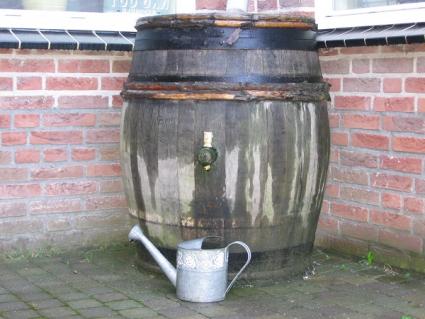 The challenge is in storing rainwater for when you need it. There are elaborate automated systems that can store thousands of gallons of water in underground reservoirs and use it to supply irrigation systems, but there are also low-tech, low-cost approaches. A common approach is to modify your downspout to flow directly into small plastic container -- this could a be a five-gallon bucket, a trash can or a specially-designed rain barrel. A valve on the bottom of the rain barrel then serves as an outdoor water source.

Saving Water Out and About

Many of the above ideas apply in other contexts such as work or school, though in these situations water conservation often involves the added step of teamwork -- organizing your office to persuade the building manager to install low-flow fixtures, for example.

When drought strikes, local governments are forced to enact restrictions on how much water is used by each household -- which averages between 80 and 100 gallons per person per day in America. By proactively reducing water consumption, more water remains in city reservoirs, making a community more resilient in times of water scarcity.

1
Comments
© 2006-2020 LoveToKnow, Corp., except where otherwise noted. All Rights Reserved.
Ways to Save Water