There is a wide variety of alternative fuel types available in the United States. Each fuel is an option to replace gasoline and to reduce the emissions caused by the burning of gasoline in vehicles. Some alternative fuels also have industrial and residential applications as well. The benefits and limitations of these fuels are key to understanding how each of these fuels might be used.

An alternative fuel is a substance that can be used as a vehicle fuel other than traditional fuel sources such as oil, coal, natural gas and propane. Each fuel has a unique combination of benefits such as availability, vehicle compatibility, energy efficiency, cost and emission reduction.

The following alternative fuels are currently being developed and researched in the United States.

Ethanol is produced from corn which has been fermented and distilled. It is one of the most widely used alternative fuels in the U.S.

The American Coalition for Ethanol states that ethanol:

Ethanol is used as an alternative fuel for aircraft. Aviation grade ethanol, (AGE-85) is an 85 percent ethanol blended fuel that is beginning to replace 100 octane low lead aviation gasoline, which has been the standard fuel for reciprocating engine aircraft since World War II. For more information about AGE-85, visit the alternative uses page at American Coalition for Ethanol. Ethanol has many industrial uses in personal care and household cleaning products as well.

Biodiesel blends can also be used in a standard oil fired furnace or boiler, making it an alternative fuel source for heating residential homes. According to Amerigreen, if all households using heating oil used a B5 blend ( 5 percent biodiesel, 95 percent heating oil), 400,000,000 gallons of heating oil could be conserved. Small adjustments in fossil fuel consumption, when done on a grand scale, can make a significant impact on reducing greenhouse gas emissions. 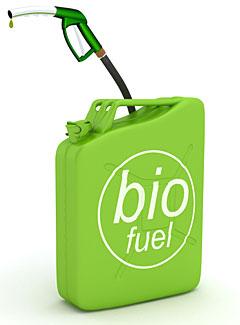 The Alternative Fuels Data Center reports that emissions from propane burning vehicles had:

Natural gas comes from gas wells. It is a form of fossil fuel and is not considered a renewable resource, however, it is considered an alternative fuel because it burns much cleaner than gasoline or diesel. According to the United States Department of Energy, the use of natural gas:

Most hydrogen is made from natural gas, but it can also be produced from water. A fuel cell uses a chemical reaction between hydrogen and oxygen to produce electricity. A "stack" of these fuel cells is required in a fuel cell vehicle.

Future of Alternative Fuel Use