The concept of producing energy from the sun may seem simple on the surface, but is quite complex in practice. The two diagrams presented below clarify the two primary aspects of solar energy and make it easier to understand how it fits into the larger question of energy production and use. Open and print them using Adobe Reader.

Solar panels are a mechanism to convert the energy contained in sunlight - in the forms of particles called photons - into usable electrical energy.

Inside a Solar Panel

Inside the panel are two silicon wafers about one millimeter thick with a fine grid of electrical contacts, called a diode, in between them. When the sun strikes the outer silicon wafer the energy contained in the photons knocks some of the electrons loose from the silicon particles, which is then captured by the electric field of the diode, and is drained away from the solar panel as electrical energy.

Essentially, the wayward electrons are magnetically drawn toward the metal contacts of the diode once they've been freed from the atomic bonds of the silicon particles.

In order to make the process more efficient, the silicon in one layer is adulterated with phosphorus atoms, which creates a positive charge, and the other has boron atoms mixed into it, which creates a negative charge. The result of the oppositely charged layers is a much greater flow of electrons between them, which are then intercepted by the diode in the middle. 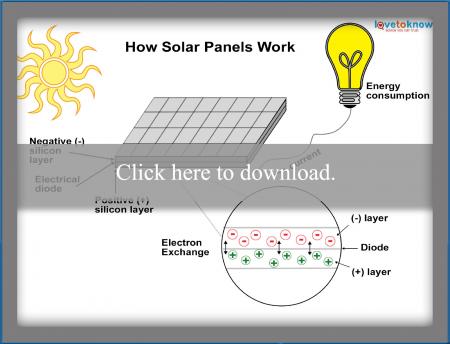 Powering the Home With Solar Energy

In off the grid locations, solar panels are used as a self-contained system to provide electrical power. But homes that are already wired to the electrical grid actually share energy back and forth with the grid, so that that there is sufficient power for the home at times when the solar panels aren't producing enough energy - at night, for example, or on cloudy days.

Solar panels produce DC (direct current) power, which is the same as a car battery. Light bulbs and appliances can be made to run on DC power, but conventional electrical devices for the home are designed for AC (alternating current) power. Thus, solar panels are typically wired to an inverter box to convert from DC to AC before entering the house wiring system.

In homes that are on the grid, the electricity passes through the utility company's meter box after it leaves the inverter, where it mixes with grid power before entering the house circuit.

If the amount of current being drawn by lights and appliances in the house is greater than the current coming from the solar panels, the homeowner will rack up an energy bill. However, if the house is using less energy than the panels are producing, the meter will actually spin backwards, sending the excess energy into the grid for use elsewhere and reducing the energy bill. 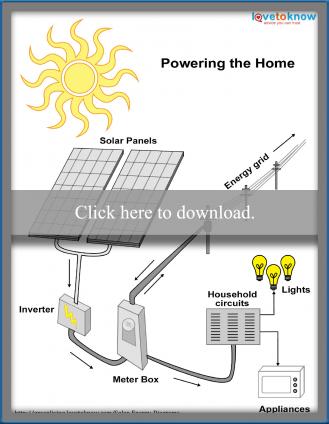 Solar energy is very appealing because it is a renewable, non-polluting energy source. As the technology becomes more advanced, solar panels may become much more widespread.