The Polar regions are the coldest on the earth. However, climate change is causing the loss of 13,500 square miles of surface area of sea ice each year at the poles. There is also a reduction in volume and thickness of the sea ice due to climate change. The effects are all interconnected and keep feeding each other in a vicious circle. 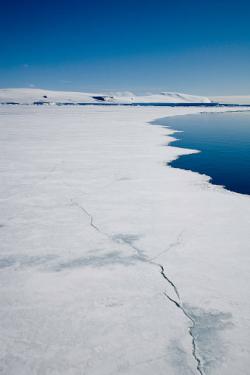 The effects of climate change are felt more strongly at the poles, which are warming faster than the rest of the globe, reports NASA.

Both the poles are covered with ice throughout the year, but there are seasonal variations in the amount of ice, as part of it melts in summer. So the ice caps are smaller in summer than in winter. The Arctic ice is maximum in mid-March before summer starts and minimum in mid-Sept at the end of the summer. The Antarctic in the south poles has its summer low in mid-Februray and winter high of ice in mid-September.

Difference in Trends at the Two Poles

The surface area of ice at the Arctic has always been decreasing and has shown a steady downward trend. There has been a decrease at an average of 13.5% in summer ice area extent and 2.8% of winter or maximum ice area extent since 1979.

The melting of ice at the southern pole at Antarctic has shown a more mixed picture. Contrary to expectations there have been increases in the surface area of ice formed from 1979 to 2010. As the 2012 Cryosphere article elaborates there have also been regional differences in ice melting within the Antarctic. Regions like Bellingshausen and Amundsen Seas show ice melting, and reduction in the surface area of ice due to large scale global warming. In contrast, Ross Seas and Indian Ocean have shown an increase in surface area of ice (pg. 7). The reasons for the differences within the Antarctic are not clear (pg. 8). On the whole there has been a small increase in surface ice area in the Antarctic (pg. 2).

There are many theories that have been put forward to explain the expansion in Antarctic ice. The most important being the influence of Interdecadal Pacific Oscillations in the equatorial eastern Pacific regions. This caused changes in the atmospheric conditions due to precipitation that lowered temperatures enough to encourage more ice formation according to a study published in Nature in 2016 (pg. 1).

Other theories, like the one published in Remote Sensing of Environment in 2016, consider that local ocean depths and continental topography influenced wind and ocean currents, leading to more ice formation. Whatever the reason this trend has now reversed and the surface area of Antarctic ice is also rapidly decreasing, as can be seen in the 2017 NASA graph for the Antarctic.

Volume of Ice Has Decreased

The melting of ice due to rising temperatures not only shrinks the surface area of ice that can be seen, but also reduces volume of ice and reduces the thickness of the ice.

Many scientists consider the loss in volume of ice to be a more reliable factor to predict future directions of ice loss than the loss in surface area of ice, as there is less variation from year to year as reported in a study in the Geophysical Research Letters in 2103 (pg. 1). According to this study, the loss in volume is greater than the loss in surface area of ice. From the 1980s to 1995 there was little loss in ice volume, but then the downward trend started and losses occured at a rate of 1,100 cubic kilometers per year (pg. 2). Since 9000 cubic kilometers in 2006 were recorded by satellites, it could mean that the Arctic could be practically ice-free by 2020. Other estimates based on IPCC's high emission scenario of RCP 8.5 show Arctic can become nearly ice-free by 2040 (pg. 4).

Decline in thickness of ice has been recorded both in the Arctic and Antarctic.

There has also been thinning of Antarctic ice since 2002, from underneath the visible ice. The whole continent is covered by a sheet of ice. Some of the ice formations from the land continues and extends as shelves into sea water. These shelves are not sea ice, but land ice as they have been formed by water or glaciers that originate on land. The bottom of these shelves are exposed to seawater. The line or zone where the ice shelf has contact with the land is called its grounding line or zone.

Warm ocean currents keep thinning the ice from the bottom and pushing this point of contact back. As the grounding line becomes progressively thinner, it can break and an ice shelf can break free from its land ice sheet to form icebergs. When these icebergs melt they add water to the sea and raise its level, as the ice has its source in the land. There are many such shelves protruding from the Antarctic ice sheet, and the thickness of ice has been decreasing at the rate of 7 metres each year from 2002 to 2010 and has been identified by airborne radar sounding of the submarine ice, according to a study published in Nature in late 2016.

A 2014 Geophysical Letters publication notes that decrease in surface area of ice has gone hand-in-hand with decrease in ice thickness (pg. 1). This has happened as ice accumulation over years has been reduced. There has been an lengthening of the melt season by 1-2 weeks for every decade since the 1980s. This happens with the early arrival of summer which starts the melting earlier. 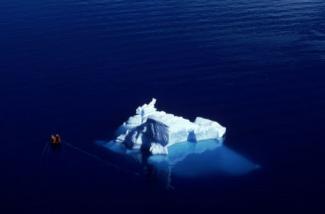 Ice cover is white while blue sea water is darker. Ice reflects back sunlight that falls on it. This is called the albedo effect. Darker surfaces absorb light. So when the ice melts the darker seas absorb more light, in other words there is less albedo. When more sunlight is absorbed the seas become warmer. Albedo has decreased by 9% in each decade.

The resulting additional heat added increases sea surface temperatures by 0.5 to 1.5 °C. Since the waters are warmer, the melting season gets extended, so that freeze up in autumn is delayed. When the warm season lengthens there is more melting of ice. So the layer of ice becomes thinner by nearly a meter each year.

The thin FYI then also allows more light and warmth in again increasing sea warming. As there is 70% FYI compared to just 38% in the 1980s, the process of ice melting acts as positive feedback mechanism. This circular effect keeps repeating and makes the whole phenomena of polar ice melting due to global warming worse reports the study (pg. 9).

Why the Effects of Polar Ice Melting Matters

The melting of polar ice has many effects:

Human activities - particularly burning of fossil fuels, cutting down of forests that used to hold carbon, and industrial agricultural methods using nitrous oxides - have resulted in the release of greenhouse gases explains the Environmental Protection Agency (EPA). By reducing activities that decrease emissions and prevent air pollution, it is possible to try and limit the rise of global warming and subsequent melting of the polar ice caps. Every little action can count. Individual, communities, businesses and nations all need to get involved.