Wastes of all kinds have been dumped into the oceans instead of being treated or recycled. After decades of this policy, it is not surprising that ocean pollution levels have reached alarming proportions.

The oil industry is responsible not only for the occasional large-scale oil spills, which prove catastrophic, but also for pollution that occurs on a regular basis. The National Oceanic Atmospheric Adminstration (NOAA) notes that natural oil seepage counts for a 45% of oil pollution in the ocean and is sometimes confused with human sources. However, 55% is caused by people.

Land-based activities, like dumping, account for 80% of ocean pollution, points out National Oceanic and Atmospheric Administration (NOAA). Legal dumping was outlawed in 1972, by the international Marine Protection, Research, and Sanctuaries Act (MPRSA), which was also passed by the USA, according to EPA (Ocean Dumping). However, illegal dumping goes on as not all countries around the world enforce this Act strictly. Even though dumping is restricted, ocean currents move the old pollutants around the globe. In the USA by 1970, the materials dumped into the oceans were: 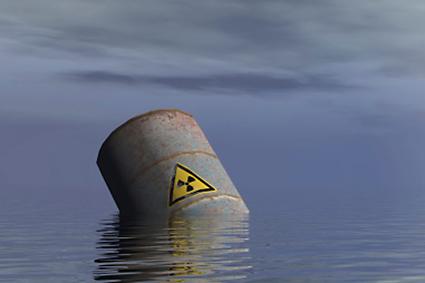 MarineBio considers nuclear waste dumped into the sea a separate issue from other industrial dumping because of the hazards it poses, and because it remains active for decades. While some of these nuclear wastes are produced at sea by nuclear submarines reactors, most are land based nuclear wastes disposed off in the ocean. In the U.S., 55,000 containers of nuclear waste were dumped at three sites between 1946 to 1970.

Water used for cooling during power production in coal and nuclear plants is released into the sea. Sometimes these liquids are warm and can raise the temperature of the ocean water, known as thermal pollution. Delicate ecosystems that cannot survive at higher temperatures may be wiped out entirely.

A more subtle result of manufacturing is acid rain. Chemicals are released into the atmosphere and pollute the air, and when they are condensed acid rain is formed. The phenomena affects the coastal waters more than the open seas due to proximity to land and sources of pollution points out Woods Hole Oceanographic Institution.

Farming and agriculture may seem far removed from ocean problems. Farmland is usually far inland and in landlocked places, such as the Midwestern United States. However, when it rains, chemical fertilizers and pesticides are washed into the rivers and streams that eventually flow into the ocean.

When the farm wastes enter local water bodies and oceans, chemicals nitrogen and phosphorus are added, causing nutrient pollution says the EPA. The addition of these chemicals acts as a fertilizers helping "overgrowth of algae". They consume all the available oxygen in the water, so other plant and animal life die. In coastal areas, this creates vast dead zones.

The largest dead zone off the U.S. coast in the Gulf of Mexico measured 8776 square miles in the summer of 2017. Nitrogen and phosphorus are found in high concentrations in fertilizers, from farm and gardens, but are also present in detergents and soaps from homes, and run-off that carries gases released through burning fossil fuels in vehicles and factories.

Few things can dampen the mood of your romantic sunset walk on the beach more than seeing a plastic bottle wash up onto shore. Of all the materials littered in the oceans, plastic is the major pollutant and accounts for 70% of the garbage. This litter could come from many sources.

This can happen due to littering on land and when the trash reaches oceans by entering streams and rivers. Ninety percent of plastic wastes are discharged by 10 long rivers flowing through some densely populated areas in Asia and Africa. Plastic, like plastic bags, is especially dangerous to marine life because it disintegrates into tiny pieces and is often ingested.

Ships dump their trash while out at sea. Twenty percent of the pollution comes from sea, writes Ocean Health Index, including trash. Though ocean liners make up only 1% of the ships, they produce 25% of the waste from ships. This is domestic, cooking, operational, and sewage wastes. Although it is generally banned in the U.S., many third world countries dump their local trash directly into the ocean, either along the shore or by ship.

Although it's hard to imagine raw sewage being dumped into the ocean, it happens on a regular basis. The oceans are vast and can break down this vile liquid, but it still causes many adverse effects on marine life.

Mining for rare metals like copper, cobalt, gold, silver, nickel, platinum occurs in oceans from reserves deep under the ocean beds or from the ocean bed surface according to Phys.org. Oceans cover around 70% of the earth surface and therefore have more mineral resources than on land. Ocean mining causes many problems.

Deep sea mining is a relatively new threat to the ocean, and can be more disastrous than mining on land for the ecosystems and its associated flora and fauna according to Huffington Post.

Another form of oceanic pollution that is receiving attention is noise pollution.

Besides these acute sources of noise, long -term exposure to low levels of sound can stress marine animals just as it does humans.

It may not seem like pollution that exists in the middle of the ocean would have much of an effect an individual's life, but it will all eventually wash up onto shore or fall as rain through the process of evaporation and condensation. People who love animals, enjoy seafood, or like to take trips to the beach should understand ocean pollution causes, and even more importantly, become part of the solution.