The common perception that solar panels are prohibitively expensive has probably prevented a lot of people from getting solar panels installed, regardless of their financial situation. However, the Union of Concerned Scientists (UCS) indicates that rooftop solar panels are significantly cheaper than they used to be, which is good news for environmentally conscious consumers. The cost of solar panels will vary, but consumers can still get a sense of what is going to be in store for them when they decide to purchase their own solar systems.

Homeowners paying for a five-kilowatt system will pay just below $23,000, according to the UCS, which doesn't include government incentives. There was a 30 percent price reduction in the costs of photovoltaic systems between 2010 and 2013 since a 5 kW (kilowatt) system cost $32,000 in 2010. Washington, D.C. and forty-five U.S. states give various incentives for solar system owners, including tax incentives and rebates. As such, the UCS indicates that some customers could potentially get their own solar systems for under $10,000.

Individuals that are considering getting solar panels installed should investigate what sort of incentives are available in their area. Forbes estimates that the initial cost of solar system installation is around $17,000 as a national average, which includes subsidies and credits. People that live in certain areas will be able to pay even less.

Check the Database of State Incentives for Renewables & Efficiency to see what is available in your area.

Homeowners shouldn't have any problem getting an estimate with regards to their solar panel installations. The process will depend upon the service that they choose to use.

With Solar City, for instance, customers can obtain quotes conveniently online and then set up consultations for free. From there, they will get a sense of the financial and functional requirements involved. Customers will know how much they can expect to pay and save based on the size of their homes, the sunlight they receive, how much power their house uses, and other factors. They'll also learn more about the ideal photovoltaic installations for their homes.

The Solar Panels Cost Guide indicates that American homes use 20 to 24 kWh of electricity on a daily basis, which equates to a 4 kW array operating on five hours of sunlight daily, costing between $15,000 and $20,000. Many factors will determine the cost of an installation, which is why getting individual estimates is so important.

Many people are drawn to the idea of starting over and constructing homes that were solar-powered to begin with, thus stopping them from having to add solar panels to an existing home. These people may or may not be choosing to live off the grid. The U.S. Department of Energy (USDE) suggests that constructing solar-powered houses is less costly and more efficient than modifying an existing house to include solar panels, but that idea is somewhat disputed. People who are upgrading their homes to include solar panels only have to pay for the rapidly declining costs of setting up the panels, and not the initial construction costs of the house, so the cost and benefit analysis will vary depending on the situation.

Factors to Consider Before Building

The cost of constructing a new solar-powered house is going to vary tremendous based on the size of the house and a number of other factors. Your Ecological House (YEH) points out that constructing new homes has negative implications for resource and land use, and that people building homes that force them to commute for longer distances may end up using more resources while living at their new homes. YEH stresses the importance of making existing homes energy efficient, especially given the rapid rate at which new homes are constructed.

American Solar indicates that solar PV systems can cost $100 for each square foot, so the size of the new home is an important factor. Larger homes also tend to use more electricity, which will increase the price.

There are plenty of excellent DIY solar installation kits available today, given the general enthusiasm for renewable energy and DIY projects.

The DIY solar installation kits from PluggedSolar have attracted attention from those in the renewable energy field. 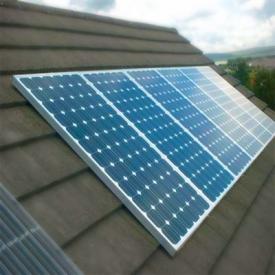 The Solar Grid Tie kit is a 1.5 kW system that includes six solar panels, a wireless power generation monitor, a grid-tie inverter, a racking system, the necessary electronic supplies, and reliable access to customer service. Federal tax credits can cause its price to go from around $3,499 to $2,449.30.

Customers may vary in terms of their preferences in solar kits based on their general electricity usage.

Where to Find Installation Instructions

Besides support and instructions from the company who produces the kit you purchase, the DIY Network has a guide available for people that are interested in installing exterior solar panels. How Stuff Works also offers some basic instructions for mounting a roof-based solar system. Self-sufficient individuals will have plenty of information available before they get started on their environmental home improvement projects.

The fact that solar panels have come down in price by such a wide margin in recent years is good news on an individual and societal level. As more people switch to renewable energy, individuals will reduce their own personal carbon footprints. The decline in the price of solar panels may be the factor that finally makes solar power completely mainstream.

0
Comments
© 2006-2020 LoveToKnow, Corp., except where otherwise noted. All Rights Reserved.
Resources, Advice & Tips for Covid-19
Read More
How Much Do Solar Panels Cost?