Reviews of the Ford Escape look at certain key features:

Because the Ford Escape hybrid was one of the first domestic sport-utility vehicle (SUV) hybrids produced, it has come a long way. The front-wheel drive engine consists of both a gas engine and a two electric motors that are electronically controlled via the continuously variable transmission or CVT; the all-wheel drive model adds a third electric motor. In essence, the engine operates as an automatic engine so no fancy vehicle knowledge is needed.

Both power sources of the engine work together when the vehicle reaches full acceleration, however in stop and go situations, the power sources alternate. 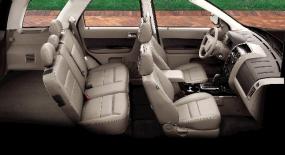 When driving the Ford Escape hybrid compared to its gasoline equivalent, only on-road is recommended due to the extra three hundred pounds of curb weight added to the hybrid. Severe snow maneuvering is fair compared to the gasoline Escape.

By model year 2008, the Ford Escape hybrid tweaked both interior and exterior features. Interior features were more ergonomic and Ford Motor Company added their Sync entertainment, navigation, and communication systems, available as an option or standard depending on model chosen. Stability control and a larger gasoline engine were also added. With the 2.5 liter engine updated by 2009, horsepower increased by twenty percent.

Driving this Ford hybrid has been well received even though it feels a little top heavy compared to its gasoline counterpart. The ride balances well, however owners of the Ford Escape hybrid have complained about noise when compared with the Honda CR-V or Toyota RAV4. Braking has been reported to be sluggish. Still with two Base models and two Limited models to choose from, the price range for this domestic hybrid has garnered attention.

By 2009, consumer Ford Escape hybrid reviews were high; most gave it a 9.3 rating where experts graded it a 7.5 according to Edmunds. To keep up with the luxury vehicle owners want, Ford added sixteen-inch alloy wheels, power driver seats, dual-zone automatic climate control, and a four-speaker CD/Stereo system with an MP3 player along with Sirius satellite radio for one year on all models. On the Limited model upgrades included keypad entry, chrome exterior accents, rear parking assist, and the easy to use Sync system that offers hands-free cell phone capabilities. The Limited comes with leather seats, heated front seats, a six-disc CD changer, sunroof, and retractable cargo cover.

The optional navigation system can be added if desired that offers a hybrid energy flow/fuel consumption display along with a seven speaker audio system. Running boards are available on both the Base and Limited models.

Consumers like the position of the instrumentation panel, especially with its cool ice-blue illumination. In the Limited model you can also choose your color of ambient indoor lighting. Another great feature is the air-conditioning setting which has an auto-shutoff once the vehicle reaches the desired set temperature.

Summing Up the Ford Escape Hybrid

Even with the four-cylinder engine in the Ford Escape hybrid, this vehicle feels like it has a six-cylinder engine. No other domestic SUV hybrid has been able to reach its fuel economy for the price range of the Escape. As more Ford Escape Hybrid reviews are expected for the anticipated upcoming model year, this hybrid continues to be a good domestic choice for hybrid-interested shoppers.