To understand computer recycling statistics you need to first understand how prevalent computer usage has become in today's world. The United States Census Bureau states that 75.6% of American households contain at least one computer. This is even more impressive when you consider that the majority of U.S. households comprised of people between the ages of 18 and 54 have more than one computer.

Statistics from the Electronics Takeback organization show that people buy a staggering number of new computers each year, which leads to a large number of computers being disposed of each year.

This doesn't even take into account the amount of peripheral computer equipment that was also thrown into dumps around the country. For example, 595,000 tons of computer monitors were disposed of in 2010 with only 33% being recycled.

Obsolete Technology Is a Problem

As new computers arrive, disposing of the old ones becomes an increasing problem. According to the EPA via another Electronics Takeback report, Americans discard 112,000 computers every day.

Web of Creation, an activist organization that encourages faith-based organizations to be green, says that if you could build a box large enough to hold one year's worth of obsolete computers it would be one mile tall, six acres long and six acres wide, and it would need to be strong enough to hold over one million tons. All that hardware has to go somewhere, whether it is recycled or not. 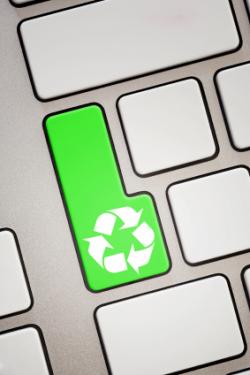 Recycling computers can have a lot of positive impacts. These include:

By 2010, computers and other e-waste accounted for 70% of heavy metals found in landfills in the U.S. A report by the EPA states that e-waste is one of the fastest growing types of waste in the U.S., and the EPA notes that many of those parts being discarded can be reused or recycled.

The e-waste in U.S. landfills contains precious metals, glass and plastics, all of which could be reused. Also buried there are pollutants such as lead, cadmium, arsenic, polychlorinated biphenyls (PCBs) and mercury.

Twenty-five states in the U.S. have laws governing e-waste disposal, and federal laws regulate the disposal of mercury and Cathode Ray Tubes (CRTs).

In California alone, the average consumer has two to three computers stockpiled in their home that they have no idea how to get rid of now that they are no longer in use. This is an issue that extends across the United States as many consumers simply don't know where or how to recycle their outdated computers. If these computers were to be simply tossed in the trash en masse, it could be an enormous environmental disaster for many areas.

The best solution is to become a statistic - a positive computer recycling statistic. Things you can do with your obsolete or unused computer include:

By recycling out-of-service computers you:

Recycling even one computer has a positive impact on stopping e-waste pollution. Civil action taken by independent citizens toward the betterment of their society is the only way to truly push these positive practices through into the mainstream. What you're left with after all of that hard work is cleaner water, cleaner air, more jobs, and a more responsible society.