Geothermal heat pumps are one of the green technologies capable of solving the problem of global warming by reducing carbon emissions. But like most other renewables, this energy source comes with its own brand of problems. People who wish to use this technology should have a good understanding of it to avoid unnecessary costs and help prevent any negative environmental impacts.

Geothermal heat pumps (GHPs), also called geo-exchange, work by exchanging heat with the ground at depths below a few feet, where temperatures are approximately constant year round.

Energy.gov explains the types of GHPs used in home and businesses.

An Oregon University report (p. 6) at the World Geothermal Conference in 2015, estimates there are 1.4 million GHPs in the U.S., of these 90% are closed loop systems and only 10% are open loop systems.

While there are several pros to geothermal heat pumps, there are also many cons. Some are generic and others are system-specific problems.

Everybody agrees that the initial installation cost of a GHP is high, and difficult to calculate, as it depends on the size of the house/building, the pump, the soil, climate and loop field. An experienced contractor is important to ensure successful installation.

Energy Homes breaks down the cost issue, saying, "This is around double the cost of a conventional heating, cooling, and hot water system, but geothermal heating/cooling systems can reduce utility bills by 40% to 60%."

GHP technology is complex and requires knowledge of various aspects. The Union Of Concerned Scientists notes that many heating and cooling installers are "not familiar with the technology," which in turn hinders its spread and maintenance. It is also difficult to find qualified contractors capable of installing GHP systems in certain regions of the country, further adding to the cost of a geothermal heating system.

Not a DIY Project

The US Department of Energy discourages handling GHP as a DIY project. This technology requires specialized know-how in many areas. To decide the system best suited for a home or business a thorough examination of factors like geology, hydrology, land availability, heating and cooling requirements and other important energy-saving devices in the house is necessary. It is not possible for everybody to calculate the optimal size of loop field or pump needed to get the most out of this system.

Electricity is necessary to run the heat compressor in closed-loop systems, and for pumping up water the whole year in open loop systems, so a GHP is not completely carbon neutral. 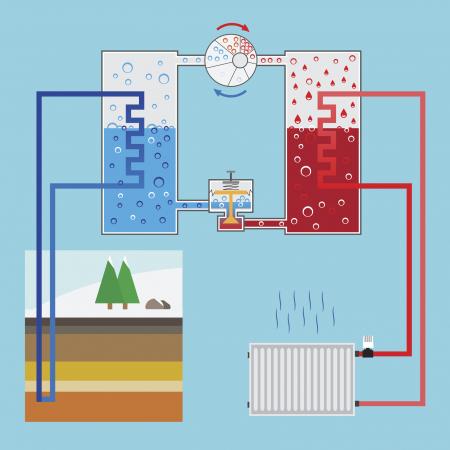 The closed loop systems share common disadvantages like impact of soils on efficiency and presence of antifreeze. Loop issues related to horizontal or vertical orientation are also present, as are concerns with direct heat exchange systems and pond systems.

Heat storage and transfer is best in heavy soils such as clay or rock. Sandy soils cannot store or transfer much heat so larger loop fields are necessary. Decrease in soil moisture below "12.5% has a devastating impact on the performance of heat pumps" states a 2014 study published in Energies (p. 3), while increase in soil moisture above 25% improves heat transfer. So dry soils are not suitable especially in direct heat exchange systems.

The closed-loop systems use water with an antifreeze for heat exchange. Older models used methanol that evaporates fast and is toxic to people and animals, so it is now banned in many parts of the U.S. Ethanol is not as toxic as methanol but is expensive. Concerns that Ethylene glycol could leak and contaminate groundwater sources has lead to this type of antifreeze also being banned for use in geothermal systems in many states. Brine (calcium chloride) is a good option, however it is corrosive, so it needs cupronickel pipes. Propylene glycol has no adverse effects on people or environment.

As long as the water mixed with the antifreeze is circulating in the closed loops there is no environmental influence. However, even small leaks can be hazardous, so it's best to stick with brine or propylene glycol types of antifreezes.

The Technical News Bulletin finds the Horizontal system requires 1,500-3,000 square feet of land for every ton of heating or cooling.

This is the most efficient system as the U-shaped loops go 150-450 feet deep in the soil, notes the Technical News Bulletin. Other issues include:

The DX uses copper pipes filled with refrigerants buried 4 to 6 feet under the ground. This system is the oldest of all the GHP models and has the most environmental impact.

In 2001, scientists at Oregon University (p. 2) declared DX systems an environment risk and do not recommend them. It is prohibited in some parts of the U.S., due to local environmental restrictions, according to Energy.gov.

Closed loop systems can also use water bodies to exchange heat. However, these also have a few issues. 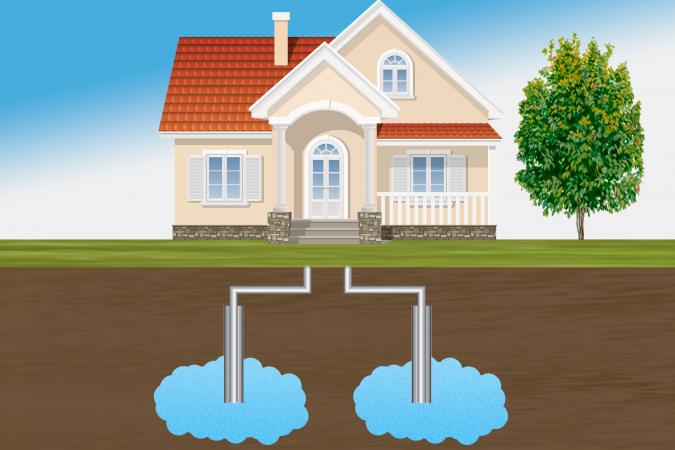 Open systems draw water from a well or shallow waters like lakes and ponds. As noted, they are not as frequently used in the U.S., but people should still be aware of their potential disadvantages.

Is There A Bright Side?

While it may seem that geothermal heat pumps are difficult and costly, there are many advantages to the system. Governments and environmental nonprofits such as Greenpeace and Union of Concerned Scientists promote geothermal energy. As performance by geothermal heat pumps is interlinked to many environmental factors, it is not a plug and play technology. When considering a geothermal system, analyzing individual details of buildings and the area to choose the right system, along with proper planning and installation, are necessary steps to enjoying the best from this technology.