The advantages and disadvantages of nuclear energy have made this alternative energy source one of the most controversial on the market today. Advocates for and against nuclear energy are equally passionate about their causes. Understanding the pros and cons of this energy source can help you make a more informed decision about your own energy use.

Nuclear power stations are set up in a multiple-step process that has been designed to help contain the energy and many of its negative byproducts. This process alone is the base of several advantages and disadvantages for this energy source.

Despite potential drawbacks and the controversy that surrounds it, nuclear energy does have a few advantages over some other methods of energy production. The production is inexpensive, reliable and doesn't create greenhouse gases.

The World Nuclear Association (WNA) says less uranium is needed to produce the same amount of energy of coal or oil, which lowers the cost of producing the same amount of energy. Uranium is also less expensive to procure and transport, which further lowers the cost. According to the Nuclear Energy Institute (NEI), "One uranium fuel pellet creates as much energy as one ton of coal, 149 gallons of oil or 17,000 cubic feet of natural gas."

When a nuclear power plant is functioning properly, it can run uninterrupted for one to two years. According to World Nuclear News (WNN) UK's Heyshame II plant ran without needing refueling for a record breaking 940 day in 2016. This results in fewer brownouts or other power interruptions. The running of the plant is also not contingent on weather or foreign suppliers, which makes it more stable than other forms of energy.

While nuclear energy does have some emissions, the plant itself does not give off greenhouse gasses. Studies have shown that what life-cycle emissions that the plants do give off are on a par with renewable energy sources such as wind power. The WNA reviewed several studies and concluded, "Greenhouse gas emissions of nuclear power plants are among the lowest of any electricity generation
method and on a lifecycle basis are comparable to wind, hydro-electricity and biomass." Low greenhouse gas emissions can be very attractive to some consumers. 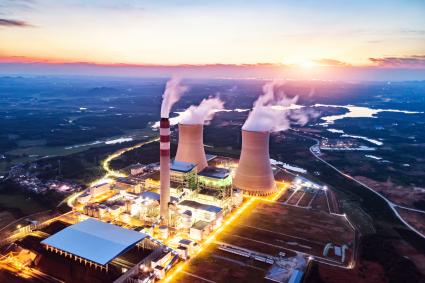 The 1979 Pennsylvania Three Mile Island partial nuclear reactor meltdown resulted in major changes within the nuclear power plant industry. Reactor operator training, radiation protection, and other areas of operations were overhauled to prevent such an incident from happening again. The World Nuclear Association explains how new reactor technology has advanced with the latest generation of reactors worldwide.

One of the reasons that nuclear energy falls under fire so frequently is due to the many disadvantages it brings. Uranium, water pollution, waste, leaks, and reaction failures.

Uranium is used in the process of fission because it's a naturally unstable element. This means that special precautions as described by the National Academies Press must be taken during the mining, transporting and storing of the uranium, as well as the storing of any waste product to prevent it from giving off harmful levels of radiation.

According to the Department of Physics Stanford University, nuclear fission chambers are cooled by water, in both the boiling water reactors (BWRs) and pressurized water reactors (PWRs). In PWRs, steam is produced indirectly by running cold water through primary pipes and the secondary pipes remove the heated water away, so the coolant is not in contact with the reactor. In BWRs, steam is produced directly as the water runs through the reactor core, so if there is any leakage of fuel, the water can get contaminated and is transported to the rest of system. 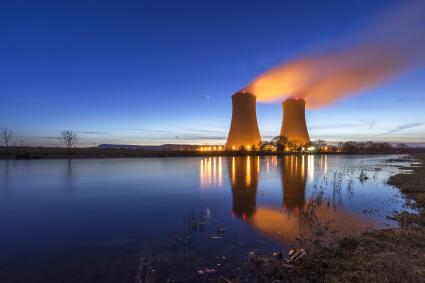 The United States Nuclear Regulatory Commission (US NRC) explains used nuclear rods are immersed in water in the spent fuel pool under 20 feet of water, to cool them before they can be transported for disposal. Radio-active water can leak out of doors in the pool when the seals that keep the doors airtight malfunction as was witnessed in the 2013 Japanese Fukushima nuclear plant disaster.

Nuclear Information and Resource Service (NIRS) summarizes how pollutants released by nuclear plants are heavy metals and toxic pollutants that harm plant and animal life in aquatic bodies. Water is released into the atmosphere after being cooled but is still warm and damages the ecosystem of the sinks it flows into.

When the uranium has finished splitting, the resulting radioactive byproducts need to be removed. The NEI highlights steps for the recycling efforts of this waste product that have been undertaken in recent years, and how the storage of the by-product that could lead to contamination through leaks or containment failures can be avoided.

Nuclear reactors are built with several safety systems designed to contain the radiation given off in the fission process. When these safety systems are properly installed and maintained, they function adequately. When they are not maintained, have structural flaws or were improperly installed, a nuclear reactor could release harmful amounts of radiation into the environment during the process of regular use. If a containment field were to rupture suddenly, the resulting leak of radiation could be catastrophic. Ready.gov provides advice and a preparatory plan for individuals on nuclear power plant disasters.

There have been several nuclear reactors that have failed and been shutdown that are still in existence. These abandoned reactors are taking up valuable land space, could be contaminating the areas surrounding them, yet are often too unstable to be removed. The United States Nuclear Regulatory Commission presents a background discussion on the decommissioning of nuclear power plants.

With so many advantages and disadvantages of nuclear energy, it's no wonder that nuclear power remains one of the most controversial sources of energy in existence. Educate yourself on this topic to make an informed decision on your views of its use.

12
Comments
© 2006-2021 LoveToKnow, Corp., except where otherwise noted. All Rights Reserved.
Advantages and Disadvantages of Nuclear Energy